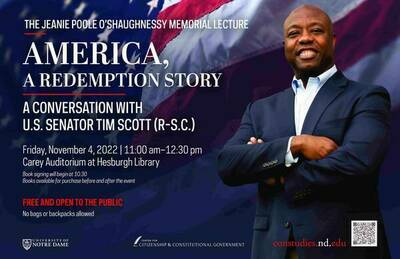 Copies of Senator Scott's book, America, A Redemption Story, will be available for purchase at the book signing preceding the event. Book signing with the Senator begins at 10:30 am outside the lecture venue.

The event is free and open to the public. No ticket required.

No backpacks or bags allowed.

Senator Tim Scott has represented South Carolina in the United States Senate since 2013. After growing up mired in poverty in a single parent household, he strives to change lives through a message of hope and opportunity. In Congress, Senator Scott’s leadership has centered on tax reform, education and job training, and providing innovative ideas to reinvest in America's distressed communities. Scott is one of eleven African-Americans to have served in the U.S. Senate, and the first to serve in both chambers of Congress.

A self-described unbridled optimist, Senator Scott believes that, despite our current challenges, the nation’s brightest days are ahead of us. During his time in office, he has been an advocate for creating more opportunities for families living paycheck-to-paycheck and helping children from impoverished communities have access to quality education. To this end, he launched his Opportunity Agenda, a legislative package aimed at achieving these goals, as well as the Senate Opportunity Coalition, a group of Senators committed to helping those in need. He has also sponsored balanced budget amendments throughout his time in Congress, hoping to assist in controlling national debt and spending.