On Thursday, October 6, at 5:00 p.m., American Studies Associate Professor and Director of Undergraduate Studies, Jason Ruiz, will present the  2016 International Comparative Studies Fall Lecture at Duke University. In this lecture, entitled "Narcomedia: Latinxs, Drug Economies, and the Politics of Representation," Professor Ruiz will be speaking on his new project, which looks at the (over)representation of Latinx in U.S. media narratives that the tell the story of how the nation procures, uses, and abuses illicit narcotics. This talk will examine the most recent cycle of Latinx drug films and series, focusing on those embedded in the so-called “Prestige Television” movement (series like Breaking Bad and Narcos) to argue that we are entering a period of renewed cultural interest in Latinxs’ roles in the international drug trade. 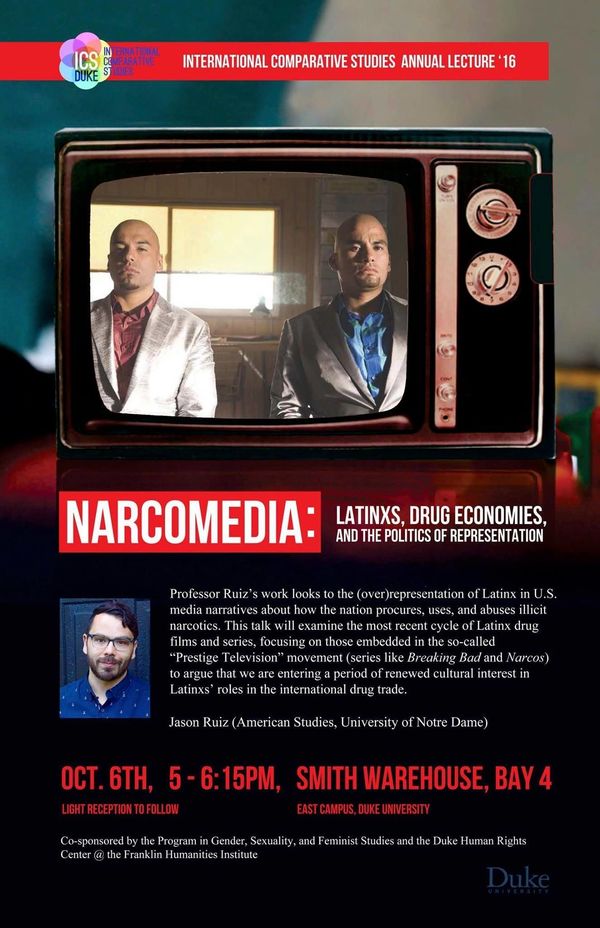 Co-Sponsored by the ​Duke University Program in Gender, Sexuality, and Feminist Studies and the Human Rights Center @ the Franklin Humanities Institute.

There will be a light reception following the talk. Free and open to the public.

Find more information and RSVP for the lecture.