Editor’s note: In the summer of 2016, as the presidential candidates entered the stretch run of campaign season, we asked Notre Dame’s in-house pundit to put the moment, the issues and the choices in context and perspective. Bob Schmuhl’s commentary on American politics and journalism frequently appears in major print and broadcast outlets in the U.S. and abroad. His observations on the 2016 presidential election and transition run on magazine.nd.edu every two weeks.

The second paragraph of Donald Trump’s mammoth, indeed “yuge” bestseller, The Art of the Deal, describes how he approached each day in business before his recent diversion to another calling.

“Most people are surprised by the way I work,” he writes. “I play it very loose. I don’t carry a briefcase. I try not to schedule too many meetings. I leave my door open. You can’t be imaginative or entrepreneurial if you’ve got too much structure. I prefer to come to work each day and just see what develops.” 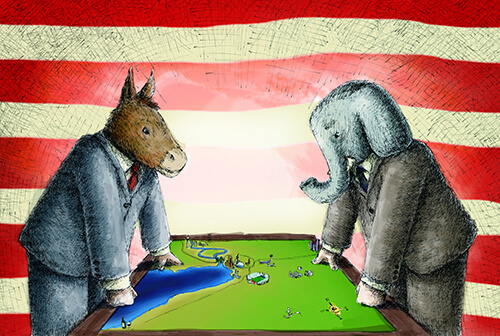 At age 70, Trump faces a new reality that couldn’t be more different from his decades as a developer or even his nearly 18 months as a political candidate. Showing up at the Oval Office each morning to “just see what develops” probably won’t suffice as a strategy for serving as president of the United States.

But even idly speculating how Trump might conduct himself in the White House is impossible — yet another fool’s errand in trying to guess what this non-politician’s involvement in high-wire politics might look like.

History, however, teaches that the leader of the executive branch — and of the free world — can’t sit back and wait for events to happen. You always have to be looking ahead to steer the course you want for the country.

“I discovered that being a president is like riding a tiger,” Harry Truman once observed. “A man has to keep on riding or be swallowed.”

Sensing, if not knowing, what to expect is crucial for political success no matter the office involved. How might tomorrow look in this particular situation? Who will be an ally on a new initiative? Who will be an adversary?

House Speaker Paul Ryan, among a legion of Republicans who expressed serious reservations about Trump during the campaign, astutely remarked the day after the election that “Donald Trump heard a voice out in this country that no one else heard. He connected in ways with people no one else did. He turned politics on its head.”

The paradox of a wealthy Manhattan developer at home in the business and entertainment elite being able to hear the “voice” of working-class and rural voters will puzzle analysts far beyond Inauguration Day on January 20. But understanding what he called “the forgotten men and women of the country” was just one secret to Trump’s Electoral College victory.

During the long campaign, the novice politico created different types of messages that were distributed by various communications media. Twitter provided the brief bromide or burst of bile, while television news outlets often broadcast his rallies in their entirety.

Exit polls enlighten us in pinpointing where Trump drew his support. Of the six different income groups, from “under $30,000” to “$250,000 or more,” Trump won the four highest, with his strongest showing (50 percent to 46 percent for Hillary Clinton) among those making “$50,000 to $99,999.” The middle class and people better off regarded the developer-personality as worth a chance.

A voter’s place of residence is also revealing. Clinton won 59 percent to 35 percent in cities with populations over 50,000, while Trump took “small city or rural” 62 percent to 34 percent. He also prevailed in the suburbs 50 percent to 45 percent.

Trump won the two oldest age groups — “45 to 64” and “65 and over” — with support of 53 percent in each case. In addition, voters without a college or postgraduate degree soundly favored him.

More than anything, though, the Trump coalition — he won the independent vote 48 percent to Clinton’s 42 percent — cast their ballots for change and inanger.

During an extended interview that Lesley Stahl conducted for the CBS program 60 Minutes shortly after Election Day, Trump seemed subdued and more reflective than the bombastic figure we kept watching throughout the campaign. This figure of restraint brought to mind another televised interview, one with George H.W. Bush after he was elected in 1988.

Like this year’s contest, that one — between Bush and Massachusetts Gov. Michael Dukakis — was a bloody, brass-knuckle brawl that emphasized negative commercials (remember Willie Horton?) and questionable charges.

“That’s history,” the senior Bush commented about the tactics employed to win the White House. “That’s doesn’t mean anything anymore.”

Amplifying his remarks, the two-term vice president who’d won the highest office said: “The American people are wonderful when it comes to understanding when a campaign ends and the work of business begins.”

Bush knew from experience that modern-day campaigning in all its noisy complexity would be very different from “the work of business” required for governing. As the transition from the Obama administration to the Trump administration continues apace, the president-elect’s past practice “to play it very loose” will be tested daily, if not hourly.

For the 2016 victor, running for the White House might have seemed like a television reality show, with cameras and microphones capturing all the public moments the candidate wanted to reveal. That’s history.

Starting January 20, the life-or-death “business” of a commander-in-chief begins, with statecraft now dominating stagecraft in what Trump hopes will be a new, improved version of “the art of the deal.”