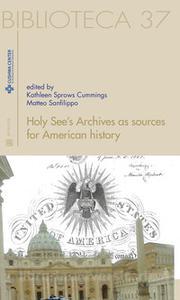 The Department of American Studies congratulates Kathleen Sprows Cummings on her recently published volume, "Holy See's Archives as sources for American history."  The book, edited by Dr. Cummings and Professor Matteo Sanfilippo of the University of Tuscia, encourages the exploration of Roman archives in a transatlantic approach to U.S. Catholic history, and includes a chapter from John T. McGreevy, dean of the College of Arts and Letters at the University of Notre Dame.

Dr. Cummings writes in her preface, "I am very pleased to introduce this book, which had its origins in a Seminar I convened in June 2014 in collaboration with my co-editor, Professor Matteo Sanﬁlippo, and one of the volume’s contributors, Professor John McGreevy. The seminar focused on transatlantic approaches to writing U.S. Catholic history, with a view toward encouraging scholars of U.S. Catholicism to utilize the Vatican Secret Archives and other Roman repositories. To that end, seminar participants visited seven archives at the Holy See and throughout Rome for hands-on workshops exploring relevant sources. Contributors to this volume led several of these visits. Professor Luca Codignola expertly guided the group through the Archives of Propaganda Fide, and Professor Giovanni Pizzorusso shepherded us through the Archives of the Holy Oﬃce. Professor Sanﬁlippo arranged most of the other visits, and he, Professor Pizzorusso, and Professor Codignola also delivered stimulating lectures to the group. I am grateful to them, as well as Professor Daniele Fiorentino, for their in-depth and illuminating presentations, revised versions of which appear in this volume.

The Italian scholars who study Catholics in the United States have been mining Roman archives throughout their careers. For me, Professor McGreevy, and other contemporary U.S.-based scholars, however, this represents a relatively new enterprise and, to a certain extent, an embrace of the approach adopted by the earliest generations of U.S. Catholic historians. Most of them were, for the most part, clerics or members of religious congregations. Many had either studied in Europe or had close connections there. They were conversant in multiple European languages, and well understood the transatlantic ﬂows of people, ideas, devotions, and beliefs that shaped the church in the United States. By the 1960s and 1970s, however,the prominence of the American exceptionalist paradigm,combined with the advent of the new social history, led historians of the U.S. church to adopt a tighter nationalist frame. As a result these historians were, in the aggregate, often less interested in identifying connections between the United States and the Holy See, and less inclined to harness the potential of Roman archival repositories. In the late 1990s U.S. scholar Peter R. D’Agostino emerged as a fervent critic of this approach. His own scholarship, focused on Italian Americans, was rooted in a deep awareness of the importance of Roman sources for illuminating the experience in the United States. D’Agostino’s award-winning book, Rome in America: Transnational Catholic Ideology from the Risorgimento to Fascism (The University of North Carolina Press, 2004), relied on Roman sources to demonstrate the importance of papal politics for 19th- and early 20th-century American Catholic life. He chided other U.S. scholars of U.S. Catholicism for ignoring Roman archives. To do so, he maintained, was to tell a necessarily incomplete story."

You may explore an excerpt from the collection here on academia.edu, or purchase the title at the libreriauniversitaria.it website.