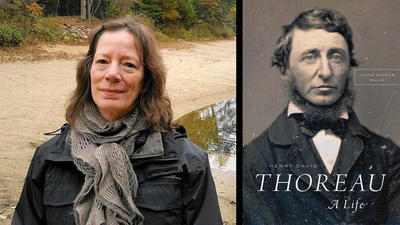 July 12 marks the bicentennial of the birth of writer-philosopher Henry David Thoreau, who is best known for his nature memoir, "Walden: Or, Life in the Woods," which stems from the two years (1845-47) he lived in a 10-by-15-foot cabin on the banks of Walden Pond near Concord, Mass. Over the years many biographers have tried to capture the life of Thoreau, each through a different lens of understanding: Thoreau as the transcendentalist, who, with Ralph Waldo Emerson and others, introduced a new philosophical movement. Or Thoreau as the naturalist, who carefully studied and recorded the ecology of the Concord area. Or Thoreau as the political activist, who spent a night in jail rather than pay his poll tax, and who fervently defended abolitionist John Brown. Or Thoreau as the low-tech poet-monk who sought to live a less material and more deliberate life amid the fevered industrialization of the mid-19th century.

The remarkable thing about Laura Dassow Walls' new biography, "Henry David Thoreau: A Life," is that she manages to weave these different yet related strands of Thoreau's character into one clear and engaging story, which is readable and well-researched. Walls believes that we have invented two central perceptions of Thoreau since his death: "both of them hermits, but radically at odds with each other. One speaks for nature, the other for social justice." But, she argues, "the historical Thoreau was no hermit, and … his social activism and his defense of nature sprang from the same roots: he found society in nature, and nature he found everywhere, including the town center and the human heart."

Walls unpacks the most common misunderstanding about Thoreau at Walden Pond. While he found intellectual and spiritual solitude there, he was not isolated from people and did not live in a remote "wilderness."

"Had he ever imagined retirement to the pond would offer an escape from society," Walls writes, "Thoreau soon learned it was the opposite: never before had he been so conspicuous." He lived near the main road to the pond and next to a favorite fishing hole ("Pouts Nest"). "In his solitude, Thoreau became a sort of magnet" for townspeople and travelers and hunters and fishermen and picnickers. His family visited him at the cabin Saturday afternoons, and he returned home for a hot meal on Sundays. The so-called wilderness around him was largely a woodlot and was being cut down for fuel. The Fitchburg Railroad — 100 yards from his cabin — had just been constructed, so 15 or 20 trains roared by each day.

Walls divides the chronology of Thoreau's life into three sections: "The Making of Thoreau" (childhood through his years at Harvard and the tragic death of his brother, John); "The Making of 'Walden'" (the background, writing and publication of the book); and "Successions" (post-"Walden" writings and activism through his death from tuberculosis at 44). Each section includes extensive research from a wide range of sources, which is likely what allowed Walls to construct a rounder and more complex Thoreau than other biographies have achieved. Walls' Thoreau is a heady and pensive philosopher-naturalist and writer. But he is also a skilled surveyor and pencil maker who often puts his writing projects aside to earn money to help support his family. He is courageous and quirky, a skilled and respected public orator, but at times socially awkward.

Walls deftly weaves Thoreau's life into the history of 19th century New England. Thoreau's literary and political world included Emerson, Walt Whitman, Nathaniel Hawthorne, Frederick Douglass, John Brown, Louisa May Alcott, Horace Greeley and James Russell Lowell, to name a few. Interspersed with Thoreau's saunters through the Concord woods and hikes up Mount Katahdin are the personal and social impacts of the The Fugitive Slave Law (1850) and the Dred Scott decision (1857) and Charles Darwin's publishing of "The Origin of Species" (1860).

Such people and events dramatically affected Thoreau's life and worldview, and Walls includes them as a means of revealing that Thoreau was a solitary nature-loving artist and an engaged social activist. As an artist, he desperately longs to see the world; as an activist he longs to save it. As an artist, he sometimes looks inward at the "I," the self; as an activist, he often looks outward with the "Eye," at the world. But, as Walls reveals, these two ways of seeing, of responding to nature and society, rarely contradict or compete in Thoreau. Instead, they powerfully converge, which is perhaps what makes him so unique, and why his writing and influence have endured for two centuries.

Tom Montgomery Fate is the author of "Cabin Fever: A Suburban Father's Search for the Wild."