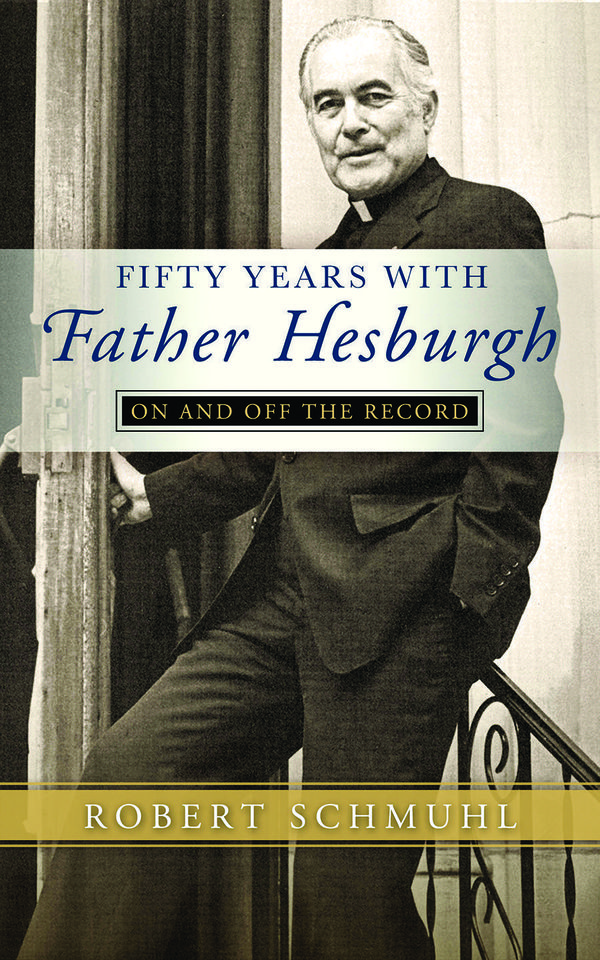 NOTRE DAME, IN, July 6, 2016—For over half a century, Robert Schmuhl, the Walter H. Annenberg–Edmund P. Joyce Chair in American Studies and Journalism at the University of Notre Dame, interviewed and wrote about the Reverend Theodore M. Hesburgh, C.S.C., who served as the president of Notre Dame from 1952 until 1987. Beginning as an undergraduate student during the 1960s, when he covered Hesburgh and Notre Dame for the Associated Press, to 2014 when he conducted his last visit with the frail ninety-seven-year-old priest, Schmuhl maintained a close relationship with Father Hesburgh. Over time, Hesburgh’s meetings with Schmuhl evolved into a friendship, which is documented in this personal and warmhearted portrait of the man who was for decades considered the most influential priest in America.

FIFTY YEARS WITH FATHER HESBURGH: On and Off the Record (August 25, 2016 publication) contains excerpts and commentary from various interviews Schmuhl conducted with Father Hesburgh about his service as Notre Dame’s president, including the most difficult years of his presidency during the 1960s when student were protesting on campus against the Vietnam War and other issues. Knowing and working with four popes and nine U.S. presidents, Father Hesburgh was a moral force in virtually all major social issues of his day, including civil rights, peaceful uses of atomic energy, third-world development, and immigration reform. Schmuhl records Hesburgh’s candid reflections on the U.S. presidents with whom he worked and his assessment of the years after he left the university’s presidency and maintained an active life of service in retirement. He describes how Hesburgh dealt with macular degeneration and blindness in his later years, enlisting students to read the New York Times and other publications to him. During the 1990s and the first years of the twenty-first century, Father Ted was, as he liked to say, “everybody’s grandfather.” His open-door policy extended beyond students to faculty, staff, alumni, and campus visitors, and continued right up until the end of his life. Throughout the book, Schmuhl captures the essence, spirit, and humanity of a great leader who transformed Catholic higher education and raised a powerful moral voice in world affairs.

"For those of us who had the honor of knowing Father Ted, we will never forget his wry humor, sage advice, and infectious faith. For those who did not, this book offers a sense of the man who was a mentor to me and countless others." —Condoleezza Rice, Thomas and Barbara Stephenson Senior Fellow on Public Policy, Hoover Institution, Stanford University, and former U.S. Secretary of State

"Consider this slender book a mouth-watering appetizer for the volumes that will ultimately be written about Father Ted Hesburgh. If you knew the man, you will relish the fresh insights. If, somehow, you lived unaware in the same world with Father Ted, this book will be a revelation. Bob Schmuhl fails utterly in concealing his love and admiration for his friend of fifty years. Read on and you will understand why.” —Ted Koppel, news anchor and author of Lights Out

FIFTY YEARS WITH FATHER HESBURGH is available in hardback and various digital editions from the University of Notre Dame Press.