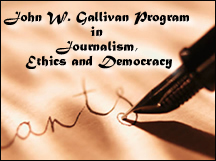 Ken Fowler, a University of Notre Dame senior from Long Beach, N.Y., has been selected as the first recipient of the annual Harry Ornest Memorial Award in Sports Journalism. The award includes a summer internship at The Los Angeles Times.

The announcement was made jointly Friday (June 1) by the Ornest Family Foundation, The Los Angeles Times and Notre Dame. Fowler will spend 10 weeks in the sports department of The Times, beginning Monday (June 4), and will return to Notre Dame for his senior year.

The internship, donated by the Ornest Family Foundation, is named for the late Harry Ornest, well-known team owner and sports executive, who died in 1998. A longtime resident of Beverly Hills, Ca., Ornest owned the Vancouver Triple-A baseball team of the Pacific Coast League from 1977 to 1981, the St. Louis Blues of the National Hockey League from 1983 to 1987 and the Toronto Argonauts of the Canadian Football League from 1988 to 1991. At the time of his death, he was vice-chairman of the board of directors of Hollywood Park race track.

Ornest, who was 75 when he died, was a longtime friend and confidant of sportswriters all over the country and would joke that the time he spent with them was his way of “educating the unwashed.”

His oldest daughter, Laura Ornest, said, in announcing the program, "My dad started out as a sportswriter for the Edmonton Journal. He loved words, he loved sports—both the business and the games—and one of his favorite pastimes was talking to sportswriters.

“Through perseverance, enterprise, knowledge and some luck, dad was able to make his dreams come true. The family feels that creating this scholarship/internship is a meaningful way to honor dad’s passion, and we are very proud to help a young sportswriter pursue his or her dream.”

The Ornest Family Foundation has designated Notre Dame’s John W. Gallivan Program inJournalism, Ethics and Democracy, under the direction of professor Robert Schmuhl, as institutional administrator of the award. It also has designated The Los Angeles Times sports department, under sports editor Randy Harvey, for the annual summer placement of an intern interested in a career in sports journalism.

Originally published by Julie Hail Flory at newsinfo.nd.edu on June 01, 2007.