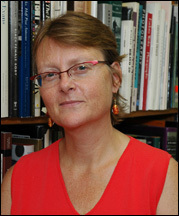 Don’t call her the Elvis expert.

Doss is the author of “Elvis Culture: Fans, Faith and Image,” published by the University Press of Kansas in 1999. But she’s not an Elvis historian, she emphasizes—she’s interested in his image and the role his image plays in the life of fans.

“I’m a visual culture historian, which is an art historian. But most people’s idea of `art’ is limited.”

Her career has ranged far beyond Elvis. Doss has written five books on American material and visual culture, including “Benton, Pollock and the Politics of Modernism: From Regionalism to Abstract Expressionism” a book that considers how we got from the realism of Thomas Hart Benton to the abstractions of his most famous student, Jackson Pollock. She also is the author of “Twentieth-Century American Art,” published by Oxford University Press.

The thread that ties her research together is public culture, and public response to that culture.

“Why do people respond to certain works of art?” she asks.

The original idea for the Elvis book sprang from a conference paper given by a friend on a popular work of art, the 1924 Warner Sallman painting “Head of Christ”—familiar to generations of Sunday school children—depicting Christ with flowing light brown hair and blue eyes. What in popular culture had replaced the ubiquitous image? Doss wondered.

“I flashed on Elvis,” she says. “It was 1992. He died in the ’70s. He has this amazing afterlife—in paintings, posters, and postage stamps. I became interested in fan culture.”

Except for last year, when he slipped behind Kurt Cobain, he’s been the top-grossing dead celebrity.

Of course, Elvis has been dead for 30 years — it’s the image, not the man, that lives on. In “Elvis Culture,” Doss notes that for many fans, Elvis — or more specifically, his image — is deeply, personally significant. But the image is multifaceted — “Rockabilly, rebel, teen angel, Army private, B-movie idol, family man, Las Vegas superstar, Nixon admirer, drug addict, dead superstar.” Elvis holds on to iconic status because his image can be continually negotiated and remade by fans.

What does Elvis mean? It’s a question that Doss has been asked often. It’s a mystery, an enigma, she says. In the conclusion of “Elvis Culture,” she points out that there are no simple “sound-bite” answers or easy assumptions to be made regarding Elvis, his postmortem popularity, or popular culture in general. Her hope, she writes, is to offer ways to think about how popular images are made meaningful in contemporary America.

Doss is currently working on two book projects that expand on her interest in image and meaning. “Memorial Mania” investigates the creation of spontaneous shrines that commemorate tragedies, and what these commemorations tell us about the visual and material culture of death. By whom, and for whom, are they made?

Her other project, “Picturing Faith,” deals with the intersections between Catholic visual and material cultures. Her research will focus on Catholic artists and the particularities of faith and belief.

“This is a healthy place to be working on the topic,” she said.

The prospect of researching the topic is part of what drew Doss to Notre Dame, in addition to the opportunity to chair an American studies program.

“I have a background in art history, but I’m most comfortable being in an American Studies department. It’s a broad-based field, and expansive enough to include the kinds of interdisciplinary work I do.”