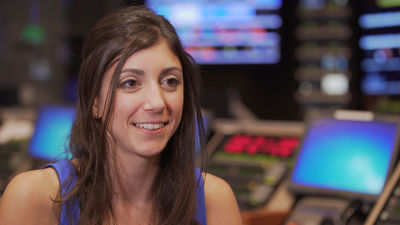 “My alarm clock goes off at 12:50 a.m, and I come into the studio at 2 a.m,” said Adriana Pratt ’12, head writer and a senior producer for Good Morning America on ABC.

At Notre Dame she majored in political science and minored in the Gallivan Program in Journalism, Ethics, and Democracy. Multiple newspaper, magazine, and broadcast internships helped her land an assistant position at ABC News when she graduated, and she has been at that network ever since.

Pratt said internships are the primary qualification she looks for when hiring — for the skills students gain from those experiences and the insight it gives them into working in broadcast TV.

“You do have to get the coffee sometimes. You do have to do random errands, especially in TV broadcast where you have to go help with props for something or ... you log tapes for hours," she said. "But if it's something that grabs you, then that's a big sign that you're in the right place.”

Pratt’s liberal arts education has been invaluable in her work.

“My Arts and Letters education opened so many doors intellectually,” she said. “It's something that I've used every second of every day when I try to make sure we're writing in a way that communicates with people.”